Keep your Vagina out of Voting

A friend of mine posted something regarding Hillary Clinton announcing her run for the Presidency.

Hillary Clinton has officially announced her candidacy for President. While I want to jump on the band wagon to support this, I gotta do some research...

Here is where a normal conservative would plug in all the insane facts they can find about why no-one should vote for any liberal ever. I would tell you all the reasons you should take a look at Rand Paul or Ted Cruz or I don't know... Ben Carson... but I'm not normal.

I just don't think your vagina or epidermis should be making these types of decisions. I shared my DNA-inspired voting opposition with Tosha, and she liked it so much she shared with her friends. Sharing is caring people - Facebook says so. 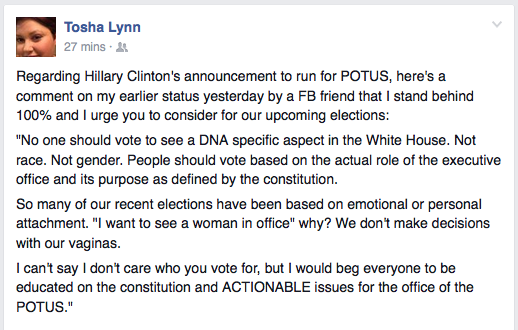 "I just think its cool that the President looks like me,
that's why I voted for Obama".

So you're saying I should vote for the guy on the right? Right?

Or my personal favorite -


"Don't you want to see a woman in the white house?"

I'm sorry did I miss something? While located on Pennsylvania Ave the White House is hardly The Philadelphia Club. I'm not here to argue feminism's value or our progress in race relations. We are discussing the appropriate individual motivation vs pragmatic responsibility when voting for the leader of the free world. The possession of one set of sex organs or the other shouldn't be your sole inducement to vote for a candidate. According to the US Census Bureau it would be a nearly 50/50 race if we all voted with our nether regions.

So let me answer that question: NO I don't want to see "a" woman in the white house. I want to see the right PERSON elected to the office of President of the United States. That is something we should all feel passionately - regardless of our personal politics. Now, I do not assume that people who revere Hilliary Clinton do so simply based on her genitalia. I do however have personal experience with individuals who, when asked why are you so excited about her campaign? "Because she's a woman!" I am asking, begging, pleading with voters everywhere to dig deep and have more than that to stand on.

If you walk into a voting booth and vote based on skin color and/or gender you're voting with the wrong organ(s). While individual liberties and personal freedom can (and should) evoke an emotional response, voting for a candidate should be a choice made after careful research, educated thought development and constitutional review.

A candidates value should be based on facts, proposed authority and individual track records for integrity. Why?  They could look like you, laugh at the same things you laugh at - you might even share DNA with this person and yet your Values are completely different. In addiion the President does not actually have the individual authority to do what they want, when they want or why they want.


But they're the President!!!!

Yes, if elected, the individual for whom you voted will serve as the President of the United States. President not dictator, not ruler, not king - President. In fact the 10th amendment affords liberties to each state of the union. Educate yourself on where the federal government has executed over-reach and where they have fallen short. Here I'll make it easy for you - Cornell Law typed up the Constitution and made each section clickable - thank me later.

Article II of the US Constitution, tells us what the President is responsible for - and what he or she may/may not do with/without the consent of House/Senate. Funny word - consent - 2/3 have to  concur; to certain things before the President is authorized to do them Article II, Section 2. That same majority can overturn Presidential actions Article I, Sections 8 and 9.

^^^ why do you think people freak out over mid-term elections? If you loathe the President you can elect Senators and Representatives who can vote in support of YOUR legislative value system. If you love the direction the President is headed in - Vote to keep like minded individuals in office or put them there.

Checks and Balances are a reality in our government. Each branch must rely on the other. Each serves a specific purpose, but none are independent of the other. Here is a pic of the basics - find more details here. 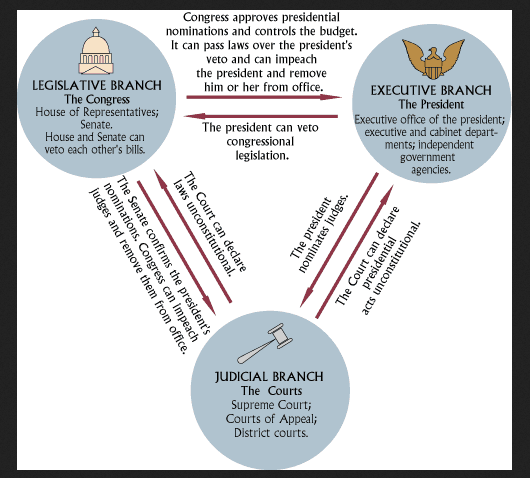 I could go on and on, but the bottom line is this, human beings like to belong. We like to feel we have a connection. We will hunt the most miniscule detail to say HEY!! I'm like you! However, basing your choice for an elected official on your appearance is naive at best. I can find someone who looks like you and shares NONE of your political or personal beliefs. I can find someone who looks nothing like you who can check every box on the electoral list.

Expand your horizons. Educate yourself on the issues (Fed/State) and VOTE.


America is a melting pot - not a sorting bin.
Posted by Jinger Brinkley