No Just Means No

This is going to be a tough one to write without sounding like a narcissistic twit, but I think it is important. There have been plenty of articles written in a general self help tone, but I'm not really the self help type. Here's the basics.

My son came home frustrated and angry. He'd been required to work in a group with 2 other students and he didn't want to. He was tired of working on projects with other people where they contributed very little, he performed the majority of the work and the entire group receives equal credit. I get it. I understand. I want him to know that he's right it isn't fair - but I didn't want to pull the typical "life isn't fair, be a team player".

We talked briefly about why he needed to learn how to work with people. I told him that he needs to learn not only the subject matter, but how PEOPLE work and how to spot people that DON'T, WON'T or CAN'T work. Its an important lesson in life so you don't spend decades allow people to walk all over you. I wanted him to learn that there are people you can and should say NO to.

I'll start simple and go from there.

Direct Sales. We've all been invited. Tupperware, Scentsy, Pure Romance, Mary Kay, Pampered Chef and my current favorites - Rodan & Fields, Younique and It Works. Guess what. We all go don't we. Even if we don't want to. We don't want our friends to feel bad. We don't want their party to be unsuccessful. Well guess what. I HATE TUPPERWARE!!!!! I went to a party. I spent $60 on cups. The cups are gone. It was a waste of time and money. So, the next time I got invited I said..... wait for it... NO. Check this out. The party still happened. My friend still had fun and got her "host rewards", and she and I are still very good friends. Why? Because she respects the fact that I do NOT like tupperware but I love her. 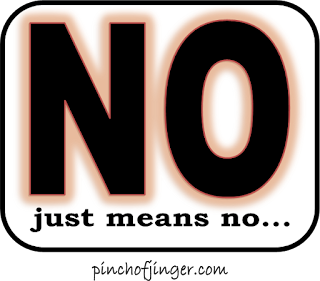 No just means, No.

People who respect the needs of others will not be offended by your inability or unwillingness to participate in their event, project or group. They'll understand that people have limits, and we as human beings have certain inalienable rights - and one of those is the pursuit of happiness - which can at times mean making time to do NOTHING.

So do me a favor. If you are overwhelmed. If you are stressed. If you feel like you are doing TOO MUCH. Just say no. If someone asks you to babysit, and it is the ONE NIGHT you and your family will have a night alone and you just really want to hang out with them ----- SAY NO!!! If someone asks you to volunteer to lead a group, and deep in your heart you know you don't have the passion or time for it ------ SAY NO ------ someone else WILL step up if given the chance. If someone invites you to a party that you don't want to go to or a show you don't want to see or a concert you can't afford ------ SAY NO ----- if they are a friend they'll appreciate your honesty.

Now all of that being said, of course there are times when we sacrifice personal time and comfort to support other people in our life. Those instances, new baby, illness, loss or death - are not every single day. If you are constantly saying yes and burning the candle at both ends you'll have nothing left when those hard times come.

Say NO - so you can have the time and energy to say YES to the things that fill your heart and soul.

Every year that Big Sexy is home we host a large BBQ for all of our friends in the area and family who can make it down. Its a big deal to me. I work hard to get the house ready, Byron and I hunt down the best deals on pork shoulder. Our friend Geoff is our co-pit master and they both tend the smoker for 12-18 hours.

When Byron is away we don't have the BBQ, and to be honest I miss it. I don't get to see friends with their big smiles. The house isn't filled with laughter, running kids or happy chaos. It feels lonely.

Well, last time he was deployed my sister was nice enough to fill the BBQ gap by having her reception at my house.


That scratched the itch... the next year things were back to normal and we rocked it for the 3rd annual Brinkley Backyard BBQ (BBB). 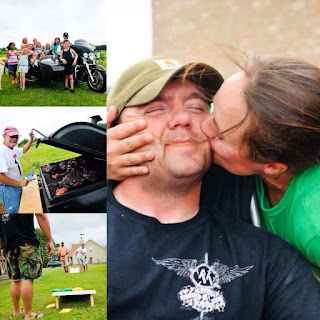 
Well this year with the big guy away... there will be no BBQ. With us heading south in the spring for our last move with the Navy there will be no 4th annual BBB. I was feeling pretty melancholy about it. So, thought I'd invite some friends over for some fun this weekend.

As fate would have it, 90% of the guests are also rolling through a deployment, and we all needed a relaxed afternoon of no rules, grilled food and fun. We had everything from race car rides (thanks to Corey and his Blue Corvette), ice cream truck visits from Happy Howie's (on call for locals). We had a grill master - Josh - who's wife is also deployed cooking up everyone's entrees, and plenty of sides to share. There were pin-ups, minecraft creepers and general shenanigans all night. (I'll update with more pics later) 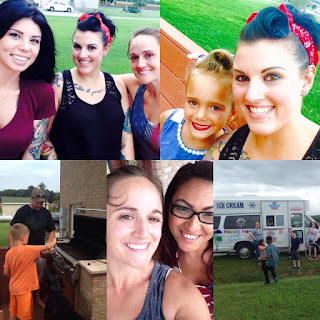 Sometimes when your heart is feeling a little empty you can find a smile by having a full house.

Thank you to everyone who made the trip down. I appreciate it more than you know.

The Truth Hurts... or it makes you laugh til you cry

Recently Nicole Arbour posted the MOST OFFENSIVE VIDEO EVER!!

and I loved every damn second of it. Why? because according to the general public telling the truth, finding humor in the mundane or looking for a reason to laugh WITH each other is an invitation for vagina sand distrobution.

We are so busy worrying about what other people will think or how we should think that we fail to be true to who we are. I'd prefer to know that you are a piece of crap human being that judges people on their appearance, race, job, car, upbringing, ethnicity, sexuality... or music preference. No need to pretend you are "tolerant" be real.

Now back to the humor. I'm the grand daughter of an Italian immigrant. Off the boat. Ellis Island... Italian Immigrant. Here's a freakin brain bomb for you I make some amazing gnocchi, lasagna and a hell of a good Sugo. I don't find it insulting when people assume I carry some awesome legacy from my ancestors.

STFU and go with it. Own who you are and be prepared to laugh at yourself. If you take yourself too seriously NO ONE ELSE WILL.