STOP Telling People How to Talk to Me

When you go to a museum there are little placards with information about the one of a kind piece of work you are viewing... without that tidbit you'd have questions. No one would be offended if you wanted to know more about a unique piece of art... so don't get your feelings hurt when people have questions about our unique way of life.

I'm a little frustrated with the self satisfying pieces flying around out there like "Things you should never say to a military spouse, fiance, girlfriend, parents......." These types of articles like to pull out examples of seemingly innocent comments made by well intended people; they then penetrate these simple statements with gross exaggerations of insensitivity and intentional cruelty. 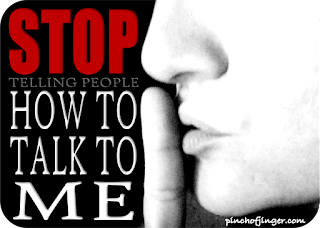 Here's an idea - be a little more charitable in your thoughts; maybe we as a collective won't be so doggone offended all the time. Perhaps if our community were less caustic, those who are trying to be supportive wouldn't find it so difficult to provide the empathy and sympathy we need. On the reverse of that - you won't be so shocked by who people are, if you stop trying to tell them who they should be when they are around you.

Friend/Family (FF): Bob is gone for business weeks at a time, I know deployment must be hard on you.

Reaction 1: What a stupid moron. WEEKS? WEEKS AT A TIME? You have no idea what its like what kind of person would compare a business trip to deployment!!!! How insensitive!!!!

Reaction 2: She's right, it doesn't matter if they're gone for a week or a year we miss them. It is hard on the family either way. Nice that someone is trying to understand what we're going through. It isn't exactly the same, but she understands what it is to miss the person she loves and how it must be tough for us.


WHOA!!! You mean it is possible that someone who hasn't walked my exact path might have a generalized frame of reference through which they are expressing empathy and sympathy for my personal situation? Noooooooo! Yes, yes it is possible. Your friend isn't saying that a business trip is the same, she is saying she can IMAGINE what it is like because she knows how much she misses her husband for a short period of time and it must be that much harder for you. She didn't say it was the same. We don't all push the same size baby out of our lady parts, but doggone if we don't understand that it freakin hurts (if you're going to throw the c-section vs natural vs drugs debate into the comments you've already missed the point and you should go back to looking things up on pinterest).

Exhibit B:
MS: Ugh, Johnny just got home from being away for 6 weeks, he comes home they put him on duty for 3 days then he leaves again for 4 months.

FF: Jease, honey I don't know how you do it. Bob goes hunting for a month and I fall apart I could never be a military spouse.


Reaction 1: Doesn't know how I do it? What the hell is that supposed to mean? Its not like I'm super woman. I need help too would it be too much to ask for someone to say "wow that's so hard" I mean really like I'm some other life form or something.

Reaction 2: Yep, it isn't for everyone. Took many years, ups and downs to learn how to keep everything running smoothly when we're apart. I still make mistakes, but its nice to know that someone recognizes its not always as simple as it looks.

That's right, someone saying they don't know how you do it, isn't a question of your human nature, its an admission of their own lack of exposure. Just like I don't know how someone gets through 12 hours of neuro surgery as the surgeon or the patient. I haven't done it. I don't know what they've been through. I don't know how they've built up their resilience for what they do. I can however be supportive.

Before I get into this last one - let me say this - if you're the non-military family entity here you'd better be a good doggone friend before you ask this question. If you are just a drama digging troll - about face forward march - aka this one isn't for casual conversation.

Exhibit C:
MS: Well, I have to be honest. I'm a little more worried about him this time. Something feels different.

FF: What if he doesn't come back?


Reaction 1: WHO ASKS THAT KIND OF QUESTION? Of course he'll come back. I can't think about if he doesn't cause then it might happen. How disgusting. How dare you!!!

Reaction 2: I don't like to think about it, but we're prepared. I know what his final wishes are, things he'd like the kids to know. He's made sure we'll be ok. I would be a mess, but I know I have people who would help me put the pieces back together.

Bad things happen. They happen everyday. How many other professions require 18 year olds to write a will? Declare who will be responsible for the disposition of their remains? Assign beneficiaries for hundreds of thousands of dollars in life insurance? Instead of being offended by such a realistic question, perhaps we as a community should face the facts and support those who need help finding answers to life's hardest questions. There is nothing wrong with being prepared for the worst - or horrific (yes traumatic injury occurs) - and being willing to share those plans with the people you trust to be there for you.


Now I'm sure some of you are reading this and seething at me for whitewashing the insensitivity of the civilian population. You'll say I'm playing into the hand of those who find military spouses to be, self catering overly sensitive prima-donas, well in all honesty - that is what I see when we as a community are constantly playing a politically correct conversation game. The last thing we need is people to walk on egg shells around us. Ask your questions, wonder how we do it, tell us you couldn't handle it... I'd prefer you be honest with me instead of picking your words so you don't offend me. When we try to muzzle our friends and family, their opinions are based on perceptions instead of facts. Let them ask, comment and debate - maybe you can waylay their fears, calm their concerns even dispel rumors and myths.

If I can handle my husband being away for 9+ months, not knowing when/if he'll be home, wondering if he'll be the same and worrying about any number of our friends and family members also in service... trust me I can handle your well intended questions. I'd be happy to explain how I do it, why it is important and what we plan on doing when this chapter is behind us. Better to have someone ask me to my face, than talk behind my back.