There is a great deal of violence in this world.

This post is going to be short and sweet.

Not really that short either.

We live in a utopia. I know you don't  believe me, but as you sit comfortably reading this on whichever device you chose to use. Know this if you are hash-tagging, going to movies, making or buying whatever you like for dinner - YOU are living in heaven on earth. If you've never witnessed violence first person. I mean VIOLENCE not a car  accident. Not a broken bone. I mean one person committing harm on others out of vengeance, hate or anger... if you've never witnessed violence thank GOD for your peaceful existence.

Here is what  I know about terrorists, and believe it or not I've met a few, contrary to what a former CIA agent says... we cannot solve the issue we have by "listening" to our enemy. Why? Because they will not reciprocate. They will not turn the other cheek. They view us (oh  and by us I don't mean Americans I mean all NON BELIEVERS) they view us as filth that must be eradicated from the earth. You, female with your head uncovered - you are a sinner. You, couple on a first date holding  hands - you are sinners. You, preacher leading the congregation in prayer - you are a sinner. Your sins seal  your fate and according to those who share the opinion of our homegrown ISIS inspired and claimed terrorist, your fate is to die.

Wake up. When these assholes attacked Paris - France responded with force. When they blew up a Russian jet - Russia responded with force. When AMERICANS are SLAUGHTERED - we DO nothing!!! Are the lives of these men and women worth LESS than those we lost on 9/11? Why should it matter how many? If a terrorist takes one person and beheads them in the street shouldn't we respond? Perhaps if we'd been less tolerant after the beheading of James Wright Foley,  Steven Joel Sotloff or Peter Edward Kassig... we would be viewed as less of a soft target. Was Boston not enough of  a catalyst to validate this threat?

What has changed so much in this country that a nation who once had 16.1 MILLION people serving in an effort to crush tyranny (WWII) is now unwilling to stand up? 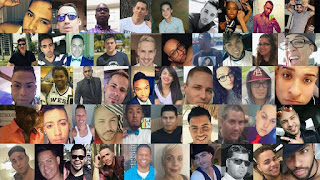 Why the lives of these men and women are not worthy of our response?

I want you to ask yourself... Am I ready for the wolf at the door?

Pray for Orlando. Pray for peace... be prepared to defend yourself and those around you.