Your Sacrifice Means Nothing

I wrote something a while back about words. How using them flippantly or taking ownership of a word or phrase diminishes its full value.

Today I want to talk to you about a word… a word that has many people in the social media universe flying from one extreme to another and back again.
The word, Simple – Universal - Usually understood….

Sacrifice.
What does Webster say the definition is;
: the act of giving up something that you want to keep especially in order to get or do something else or to help someone
: an act of killing a person or animal in a religious ceremony as an offering to please a god
: a person or animal that is killed in a sacrifice
For sake of simplicity let’s focus on the first definition listed. “giving up something that you want to keep”.
Hey, on call nurse? Do you want to keep sleeping? Sure you do, but you sacrifice your rest to help others through the night. It doesn’t necessarily have to be trauma, but if you are called upon you answer.
Hey, preacher? Do you want to give more time to your family? Sure you do, but when called by a member of your congregation you answer and sacrifice your time to help someone else.
Hey, business owner? You’d like to put the $500 profit in your pocket this quarter, but when the neighborhood kid needs a job you sacrifice that money to make room on your employee roster.
Hey, mom/dad? How much have you sacrificed for the welfare of your children? Have you given up material items? Worked longer hours? Spent hours, days, weeks… even months or year away from home?
But but but.,… according to the spinning turbulent world of pay for play media and social condemnation your sacrifices are no longer valid. Thanks to strategic manipulation and emotional word play anything less than giving your life is no longer a sacrifice.
Yeah… you’re right. Superman couldn’t make that leap. But we just got pushed there….
Stop the madness. Seriously.
Here is the transcript from the interview in question: 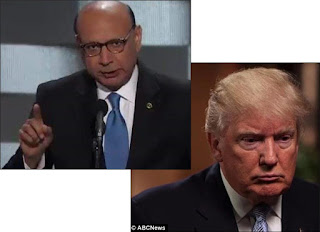 And yet if you ONLY read Facebook or Twitter or whatever social media hub you go to for "news" you'd see this statement as if it said "do you think you've sacrificed the SAME as the Khan's?" wait wait wait... yep. You see I missed the interview. I missed Mr. Khan's speech. When I was reading post after post I was P________SSED!!!! So, I went back I watched them both. I read them both.
Mr. and Mrs. Khan. Your sacrifice is of the highest accord. We as Americans are humbled (or we should be) your son chose to serve this nation, and gave his life in our defense.  Mr. Trump has not made the same sacrifice as your family. The vast majority of Americans have never even considered doing so. We, as a nation are forever in your family’s debt. That is without question.
Mr. Trump. I believe that you want to rebuild this country into the production entity it once was, I view your platform as one of economic focus and structural reinforcement. I HOPE that if honored with this position you would humble yourself to uphold the dignity of the office. You were baited, Sir into making a statement which implied a belief that your sacrifice is equal to that of the Khan’s. I do not believe you see it that way, but someone who holds the title President of the United States must be prudent in thoughts and words – even if he must sacrifice a part of his ego in doing so. It wouldn’t have been “politically correct” to say “my sacrifices are nothing in comparison to those of Gold Star Families”… no, it would not have been politically correct – it would have just been the right thing to do.
To the media who seems solely focused on click-bait: This act of selflessness does not nullify the smaller sacrifices made by Americans every single day. They are not of equal weight – the loss of a Soldier or First Responder in comparison to the small things we as Americans do for each other. We give openly. We work tirelessly. It is you, the media, who is drawing parallels where even the candidates do not venture to cross lines.  Honoring a physician for sacrificing time and money to provide services to those in need, is not intended as a slap in the face to Service Members who have lost limbs fighting for their country. Saying a truck driver sacrifices time with his family is not an intentional dig against Gold Star Mothers and Families.

Stop playing word games with the emotions of the American people. Most of us are smarter than that. Some of us will go through the effort of verifying the context. Few will follow through with research.
Bring back objectivity. Bring back integrity.